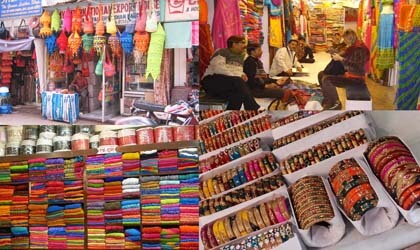 Jaipur is the capital and the largest city of the Indian state Rajasthan. It is named after Jai Singh II, the ruler of Amer who founded the city on 18th November, 1727. Jaipur is known as “Pink City” due to the beautiful buildings painted in pink to welcome Prince of Wales and Queen Victoria in 1876.


Most Visited sites in Jaipur:

Hawa Mahal: Hawa Mahal is a palace in Jaipur. It was built in 1799 by Maharaja Sawai Pratap Singh. The designer of this great palace was Lal Chand Ustad. Its exceptional five-storey exterior is similar to the honeycomb of a beehive with 953 small windows which is termed as jharokhas in local language and is decorated with complicated latticework. The palace was designed in this way so that royal ladies can observe daily life and festivals celebrated in the street below without being seen since they were abide by the strict rules of “purdah”, which forbade them from appearing in public without face coverings. This architectural feature also allowed cool air from the Venturi effect to pass through and it makes the whole area more soothing during the scorching summer heat of Rajasthan. Most of the time, people see the Hawa Mahal from the street view and think it is the front of the palace, but in reality it is the back of that palace.

Amer Fort: Amer Fort is a fort situated at Amer, Rajasthan, India. Amer is located 11 kilometres away from Jaipur, the capital of Rajasthan. The palace is located high on a hill and is the principal tourist attraction of Jaipur. The town of Amer was originally built by Meenas and later it was ruled by Raja Man Singh I (December 21, 1550 – July 6, 1614). Amer Fort is famous for its artistic Hindu style elements. It is constructed with large ramparts and series of gates and cobbled paths, the fort overlooks Maota Lake, which is the main source of water for the Amer Palace. In 2013, Amer Fort was declared a UNESCO World Heritage Site.

Jantar Mantar: The Jantar Mantar monument in Jaipur, Rajasthan is a collection of nineteen architectural astronomical instruments built by the Rajput king Sawai Jai Singh II, which was completed in 1734. It is the world’s largest stone sundial and is a UNESCO World Heritage site.

Jalmahal:  Jal Mahal, in English means “Water Palace”, is a palace in the middle of the Man Sagar Lake in Jaipur city, the capital of the state of Rajasthan, India. The palace and the lake around it were renovated in the 18th century by Maharaja Jai Singh II of Amber.  The Jal Mahal palace is not open to visitors.

City palace: City Palace includes the Chandra Mahal and Mubarak Mahal palaces and other buildings, is a palace complex in Jaipur. It was the seat of the Maharaja of Jaipur, the head of the Kachwaha Rajput clan. The Chandra Mahal palace is now converted to a museum, but the greatest part of it is still a royal residence.

Birla Mandir: Birla Mandir, Jaipur is a Hindu temple located in Jaipur. This magnificent temple is located at the base of Moti Dungari hill in Rajasthan. Sometimes the temple is mentioned as the Laxmi Narayan Temple.

Albert hall museum: The Albert Hall Museum is the oldest museum of the state and functions as the State museum of Rajasthan. The museum building was designed by Sir Samuel Swinton Jacob and assisted by Mir Tujumool Hoosein. The museum was opened for public in 1887.Maharaja Ram Singh initially wanted this to be a town hall, but his successor, Madho Singh II, decided it should be a museum for the art of Jaipur. The museum has a rich collection of paintings, carpets, ivory, stone, metal sculptures, and works in crystal.

Nahargarh Fort:  Nahargarh fort was built in 1734 by Maharaja Sawai Jai Singh II, the founder of Jaipur. This fort never came under attack, however many notable historical events occurred here. The treaties with the Maratha forces and Jaipur in the 18th century were signed here. During the Indian Mutiny of 1857, the Europeans of the region, including the British Resident’s wife, were moved to this fort by the king of Jaipur, Sawai Ram Singh, for their protection. Nahargarh was also a hunting residence of the Maharajas.

Man Sagar Lake: Man Sagar Lake is an artificial lake in Jaipur. It was constructed it in c. 1610 by damming the Dharbawati river and is named after Raja Man Singh, the then ruler of Amer. The Jal Mahal is situated in the middle of the lake.