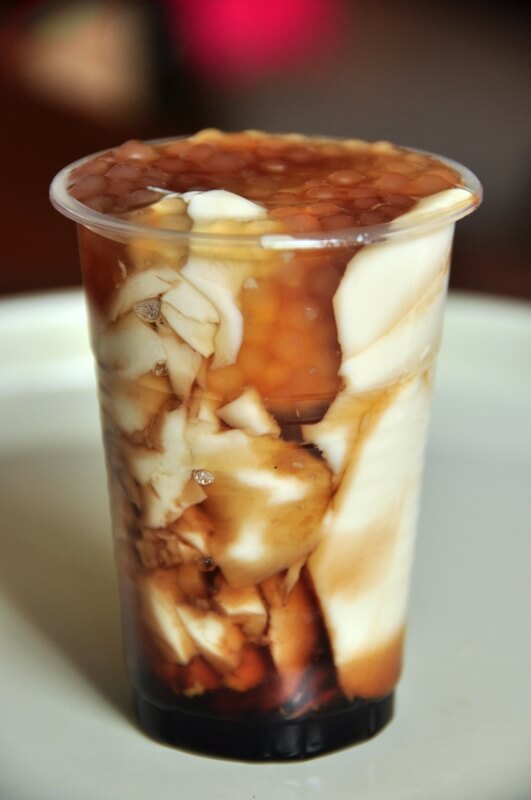 “I think of street food as the antidote to fast food; it is the clear alternative to the king, the clown, and the colonel.” –Anthony Bourdain

An excellent way to immerse yourself in a particular city’s background and culture is to experience it in the streets; from the street festivals, street parties, street traffic and vendors and best of all, the street food.

Without a doubt, the Philippines is a great country to experience the street life. After all, it is melting pot of several cultures that it would be no wonder that the country has a myriad of culinary and gastronomic dishes to offer. From high-end restaurants, food trips in Pampanga—even to the streets, there is always something succulent and delectable to enjoy. Undoubtedly, the best way to fully experience the true flavor and character of the locale can be tasted from the streets where a multitude of flavors and types of food can be enjoyed. To uncover the true essence of being a Filipino, take the plunge and try out some of the offbeat epicurean food the Philippines has to offer right off the streets. Here are some of the must-try street foods you should sample whenever you are in the country. 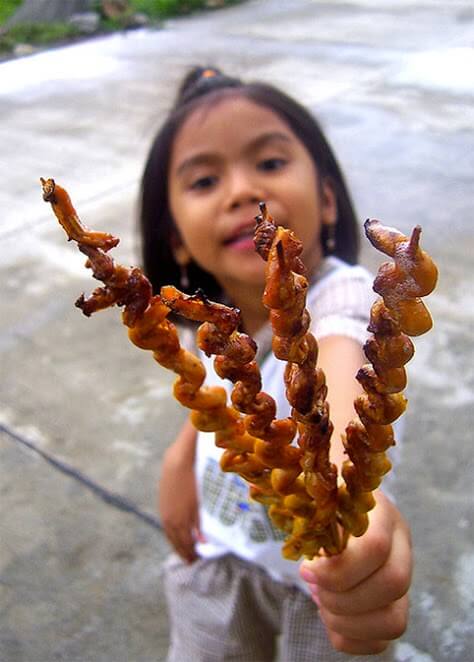 Locally known as adidas (Chicken feet), helmet (chicken head) and liston or isaw (chicken intestines), these various chicken street fares are testaments to how Filipinos never let anything go to waste. Although not for the faint-hearted, these bizarre barbecued chicken parts should be something every tourist should have a taste of at least once in their lives. 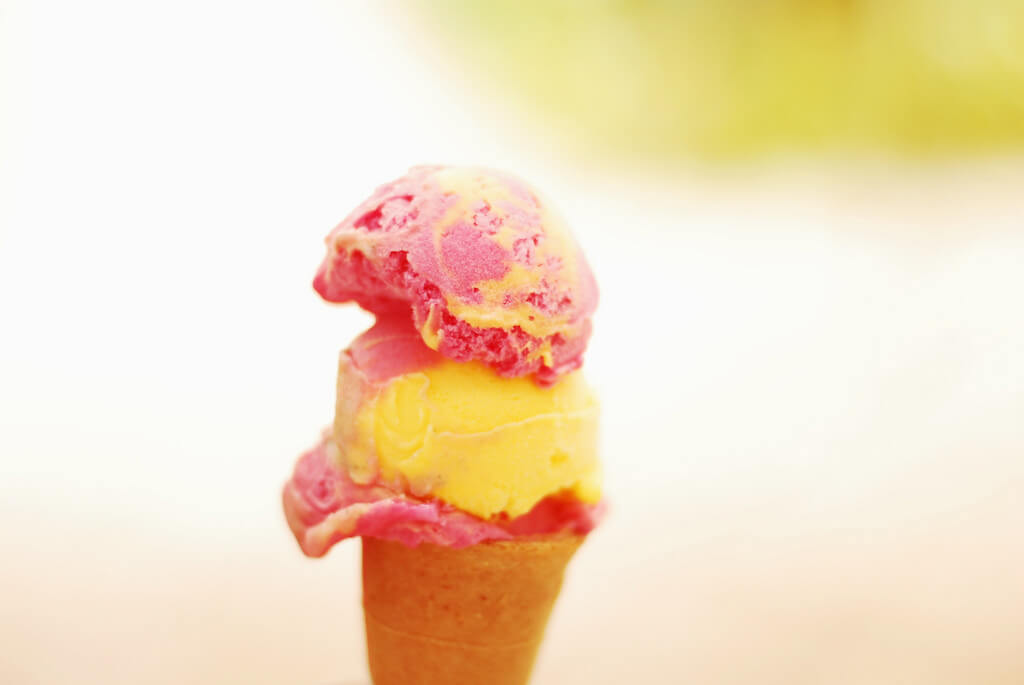 Despite its moniker, do not let this ice cold treat fool you as it is not literally dirty. This street staple got its eponymous name from the outward appearance of the street carts they usually come in, and it has stuck ever since. Additionally, as the street vendor pushing these carts have traveled extensive distances on foot, the vendors also appear to be less than spic and span and would scoop the ice cream without gloves. Despite this, though, they carry some of the most unusual and delectable flavors that are normally unavailable in the mall coming in cheese, buko, and ube flavors. 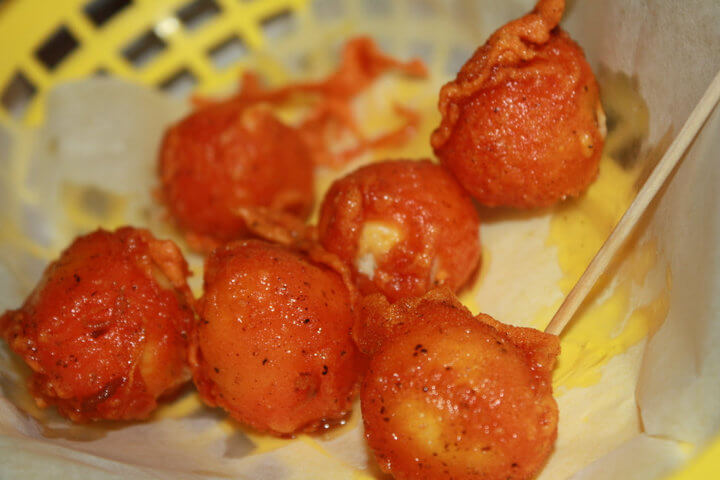 Filipinos have a certain flair for repeating words to make a name. Names such as “Bong-Bong” “Jun-jun” and “To-to” are not strange in the country and the street food staple “Kwek-Kwek” is indicative of the Filipinos love for repetition of words to make a moniker. Coated in an orange flour and egg batter, “Kwek-Kwek” is a hard-boiled quail egg best eaten with vinegar and is found in almost every nook and cranny in the bustling streets of the Philippines. 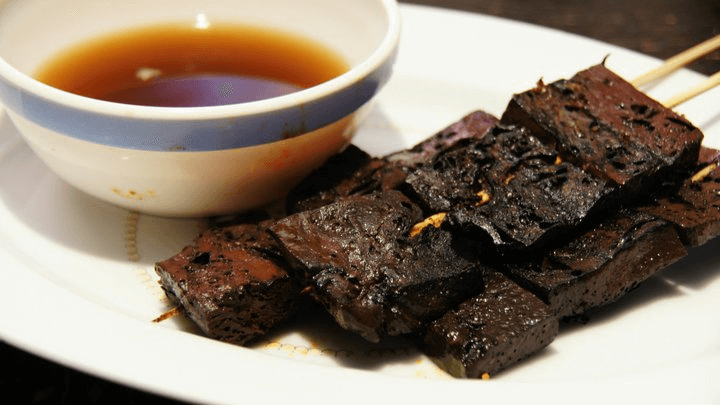 This is that one definitive street food fare which culinary adventurers should give a try. Although the name is relatively innocent and reminiscent of an old technology from our parent’s time, it is actually a slang given for grilled chicken blood. It might seem ludicrous to grill chicken blood, but it is actually quite popular in the Philippines. If you feel particularly daring, you might want to give Betamax a try.

In the wee hours of the morning, you will often hear a street vendor calling out “Tahoooo” at the top of their lungs. This is actually his way of beckoning people to buy some of his taho or is a known signal call for buyers that he has arrived ready to serve his street fare. It is one of the most common things you will see Filipinos sipping on—especially on a cold and rainy day. Taho is basically warm and fresh soy, topped with melted brown sugar and sago (small tapioca balls). Taho is a street food staple that is both delicious and warm—the perfect snack to start or end the day. 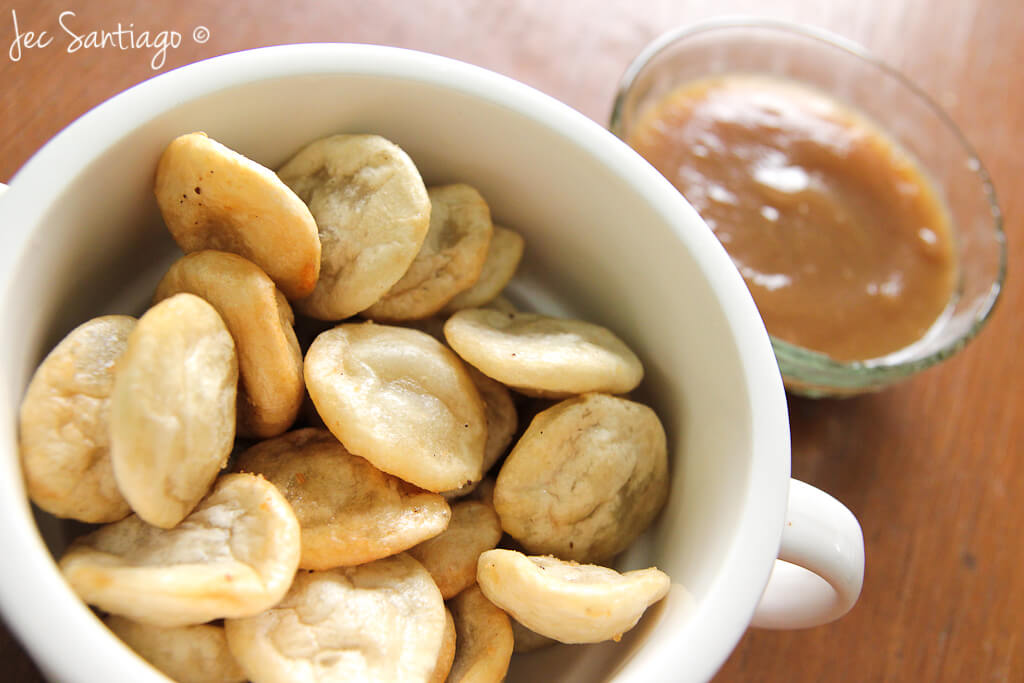 Fishball is the Filipino counterpart of the American meatball, except that they are made of flour and fish and looks more at home skewered than on a plate. It is a favorite of Filipinos and is affordable as well. The fishballs are deep fried in a wok and are then skewered into a BBQ stick. The fun part is choosing the best sauce for your fare as there is a wide variety of sauces to choose from: BBQ sauce, spicy vinegar mix, sweet sauce, etc.—or even the sauces mixed all together just to get that perfect savory flavor.

No list would be complete without the inclusion of balut as this is considered as the holy grail of Filipino street foods. This street food fare has transcended all the other street food staples by making a worldwide appearance in shows such as Fear Factor and Survivor—attributed mostly to the Balut’s shock factor. Best eaten at night, the balut is literally duck fetus, and though that may not sound appetising to you, the juice you get to sip on upon cracking the shell is incredibly delicious you would immediately forget that you are eating an unborn duck.
Author bio: Glenn Domingo is a Filipino travel blogger who loves to experience the uniqueness of different places here in the Philippines. He is passionate about writing various articles about the trips that he has gone thru to share how beautiful of his country was. He is currently writing for Alviera a joint venture of Ayala Land and Leonio Land.