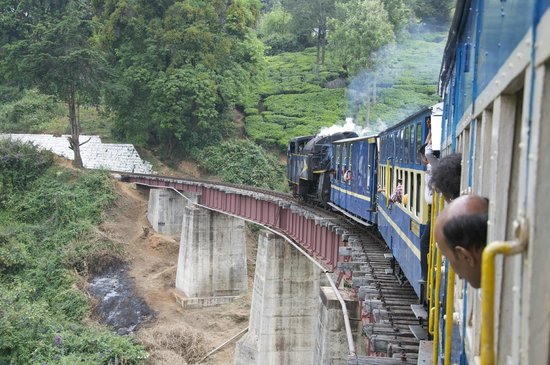 the hairpin turns and the mountain scenery…

these are the things which make a toy train ride memorable.

Time is the most coveted thing… and if you have that then obviously a toy train ride in India would make you cherish the moments you would preserve.

Toy trains are not only a mere mode of conveyance in India but also an experience that each and every travel lover should try sometime. Two of the such routes which are very popular and well known for various purposes like its heritage, its captivating journey & the legacy are shared here.

The booking of all these trains can be done from Official website of Indian railways – www.irctc.co.in

This is the official name of the Darjeeling Toy Train. Passengers go on board from the base of the Eastern Himalaya. The train travels flat lower reach and then moves up to the lush green rolling hills and tea plantations.

Toy Trains of Darjeeling Himalayan Railway (DHR) run along narrow gauge track passing through some of the most scenic mountain routes in the world. The oldest toy train in the history of Indian Railways, has been recognized as a UNESCO World Heritage Site since December 1999.

Way back in March 4, 1881, the Viceroy of India Lord Lytton inaugurated the Darjeeling Himalayan Railway by riding the first leg of the journey from Siliguri to Tindharia. His wife Lady Lytton accompanied him

The starting station is New Jalpaiguri or NJP. During its journey which is 88 kilometers long the train passes through Kurseong, ghum (The highest Railway Station in Asia at the altitude of 7,407 ft) and finally reaches its destination- Darjeeling.

The ride is unparallel when it comes to absorbing the superlative beauty of Darjeeling hills. A small steam engine pulling small coaches up the mountains through awesome landscapes and overcoming turns and gradients using sheer engineering ingenuity. The pace at which the train moves through the hilly terrain is at times so slow that you can often spot the local school children hopping on and off the train on the move.

The journey begins at Mettupalayam station in Coimbatore district of Tamil Nadu. It covers 46 Kilometer in 5 hours to reach Ooty, the famous hill station of India. The uniqueness of this rail line lies in it being the steepest one in Asia.

This is a truly amazing journey that takes tourists from a height of 1069 feet to 7228 feet. The history of the train can be traced back to the times when it was very difficult to reach Udhagamandalam – as Ooty was called in those days. Travelers needed to ride on a horse back or carried on ‘dollies’ through a forested path to reach Ooty. 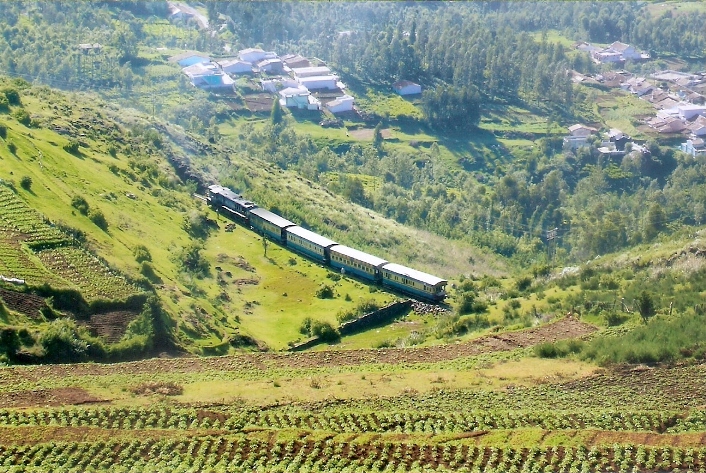 This access difficulty gave birth to an idea of constructing a rail line to connect the hilly areas of Coonoor and Ooty from plains. The first thought was kept in the year 1854, however, it took around another forty years before the actual work could begin. A Swiss inventor, Riggenback worked on it, and built up the initial line upto Coonoor by the year 1899. Later, by 1908, the track was extended upto Fernhill and then Ooty. In 2005 UNESCO declared it as a World Heritage site.

This mountain railway journey has been filmed by famous Filmmaker Mr. Maniratnam and used in the song sequence of Dil Se. Indian film lover can’t forget Shah Rukh Khan dancing on the trains to the tunes of “Chaiyya Chaiyya..” .

The train departs from the Mettupalayam station at 7.10 am in the morning.  The train runs with a slow pace during its uphill journey. This is because the train overcomes 200 curves , 250 bridges and 16 tunnels on the way. Quite logically the downhill  journey is quicker and takes only three and half hours.

But this sluggishness gets compensated by the gorgeous view that surely enthralls you. The wildness of Nilgiri forest, the very innate sound of jungle, so many Rivulets altogether get combined to a ravishing experience.

Take a left side seat while your journey towards Ooty as the right side might obstruct your view due to the mountain walls.

The most fascinating thing about this journey is the existence of a steam engine, a 19th century vintage. The engine is connected to the end of the train and it pushes up the coaches during its five hour journey.

If these facts attract you and you are planning a trip, then act fast. Because it’s a tiny train. Only 100 seats in 2nd class and a dozens for the 1st class are available for booking. The Demand gets steeper in peak season. The fare for first class is Rs. 142 and second class is Rs. 23. Extremely cheap for such fantabulous ride.