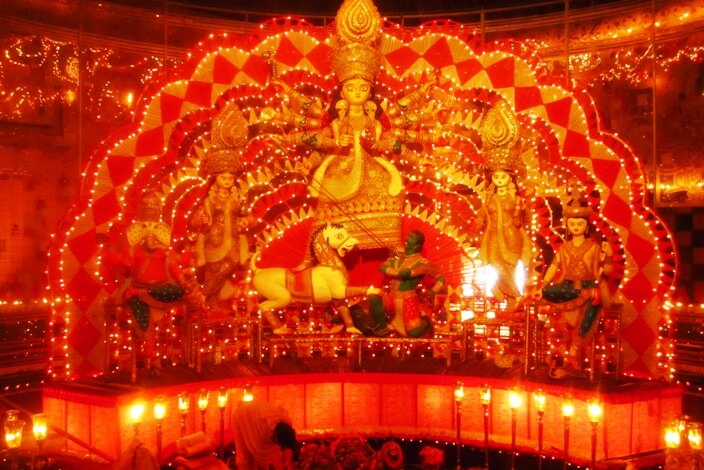 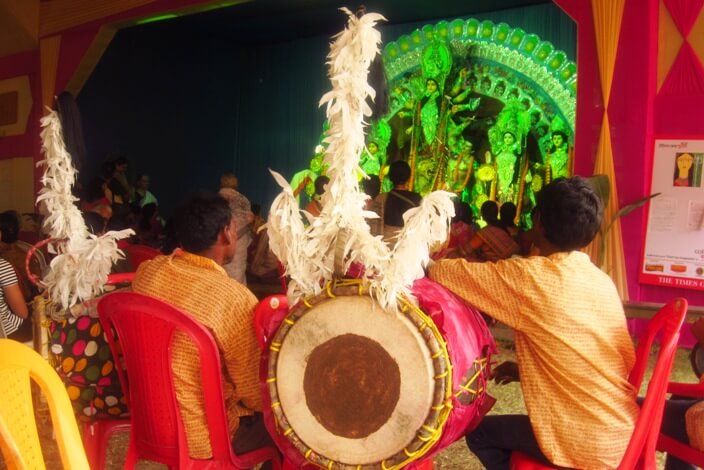 Durga Puja- the biggest Bengali festival (or should I say event considering the current hype?) was ended just now. The above fact is well-known but can you imagine what factors act as catalysts behind this craze? There may be more than one factor which play big roles in this; however, one of the most important factors is the “Best Puja Award” offered by many business groups and organizations to one or three top pujas of Kolkata. Currently, the award sponsors offer award in many categories like best puja, best pandal, best idol and lot more. This completion encourages the puja committees to give their best effort to win the prize and the people enjoy some best of the best pujas in Kolkata. 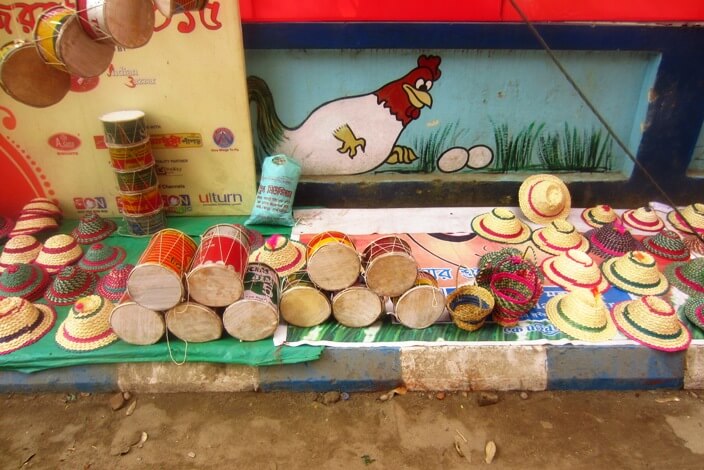 The Durga Puja award was first introduced back in the year 1985 by Asian Pains. According to them “a seed of an idea discussed over lunch by advertising pros Derek O’Brien and Sumit Roy, and poet Subhash Mukhopadhyay, led to the instituting of the Asian Paints Sharad Shamman Awards to honour the three best pujas or Shreshtho Pujas. In time, this would also include one pandal each for Discovery of the Year (Bauchorer Bismoy), Innovative Excellence (Nobo Nakshi), and Best Idol Maker (Best Pratima Shilpi).” Source: http://sharadshamman.asianpaints.com/aboutapss.htm

This award facility had changed the puja environment in many ways. It is now more culture oriented and has made a traditional comeback since then. Let’s see the award categories and the winners of 2015 Asian Paints Sharad Samman.

Discovery of the Year – 2 awards 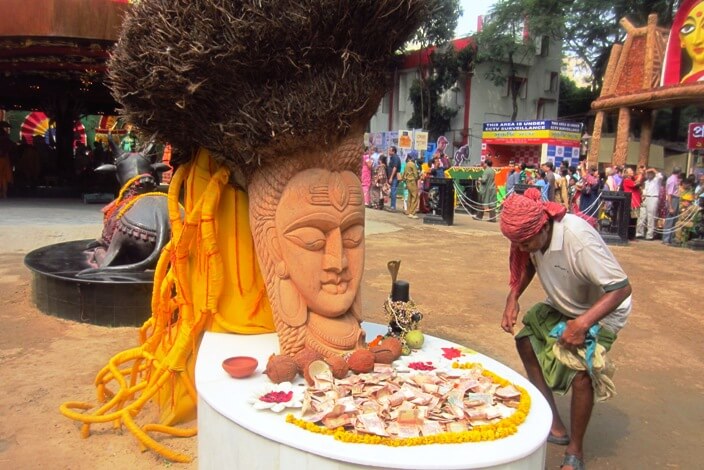 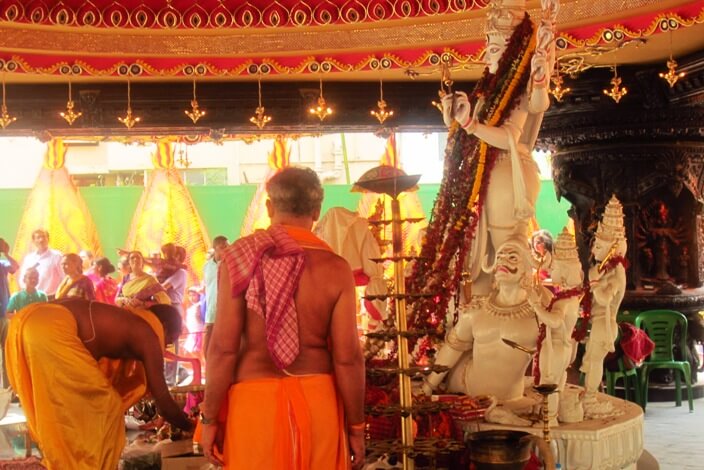 Inspired by the Tamil Nadu Chittirai festival, the central concept is universal motherhood. The pandal has touches of the temple, architecture, dance forms (Kabadiattam) of Tamil Nadu. They have put forward the social message of the ironical treatment of mother as a goddess and mother as a captivated household member. Noteworthy is the idea of ‘Akalbodhon’ by collaborating Ram and Ravana together. 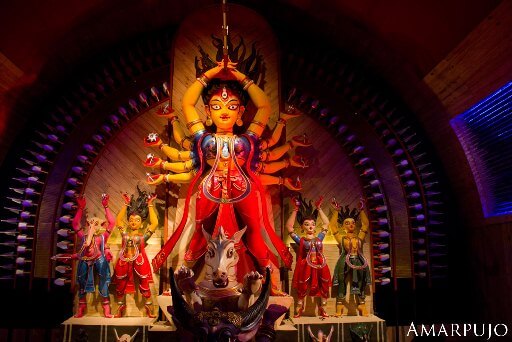 This Puja has tried to uphold the message of women power as well as the power of creation is also being celebrated. The use of stark red and blue colours inside the pandal reflects an eternal clash between two primal forces, i.e., Shiva & Durga, which is essential for every creation. The Goddess does not have any traditional Asura here, instead she is standing over Lord Shiva which again reveals the underlying tone of creation. Interestingly, both the interior and the exterior of the pandal have been curved out of recycled materials, including tin drums, metal shutters, steel spoons, mosquito nets etc. 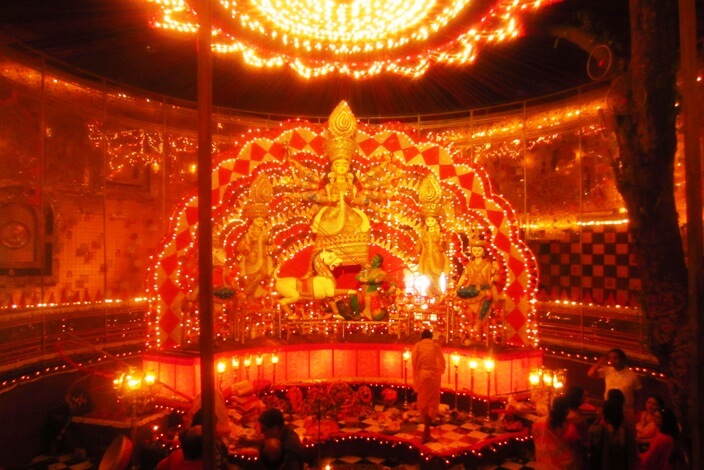 Making the past come alive has been the central theme of Selimpur Pally Durga Puja this year. The entrance to the main pandal has been decorated with thin coir ropes, hack-saws and traditional Bengali hand fans (talpatar pakha). In the background, one can hear the metallic sound of hack-saw as well as the traditional Chandi Paath every Bengali is so familiar with. The idea is to recreate everything that a Bengali mind can associate with Durga Puja. The Goddess here is in her traditional form. Expert craftsmen from Krishnanagar were specially employed to create the royal background, the canopy and the crown of the Goddess. The pandal has been built around a big tree, thus keeping the spirit of an eco-friendly environment alive. 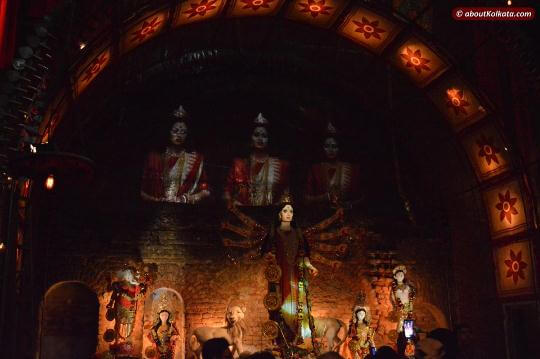 Theme : Women as a Caged Entity

The main theme is around the dichotomy of the girl as a commander before marriage and as a caged, enslaved entity after marriage. Using scrap metals and video projections, they have beautifully portrayed the irony of treatment of women in routine life and as a goddess. Using subtle lighting and dark wood furniture, the concept came through very effectively.

Theme : Fluidity of Life and Death

Celebrating 50 years, they have depicted mother goddess as the epicentre of Samudra manthan of which the eternal fluidity of life(amrita) and death(vish) has emerged. Using biodegradable materials like coir and embroidery cloth, they have presented the theme inspired from mythology. The pots and metal wires have been connected to symbolise the womb and the ever continuity of life. 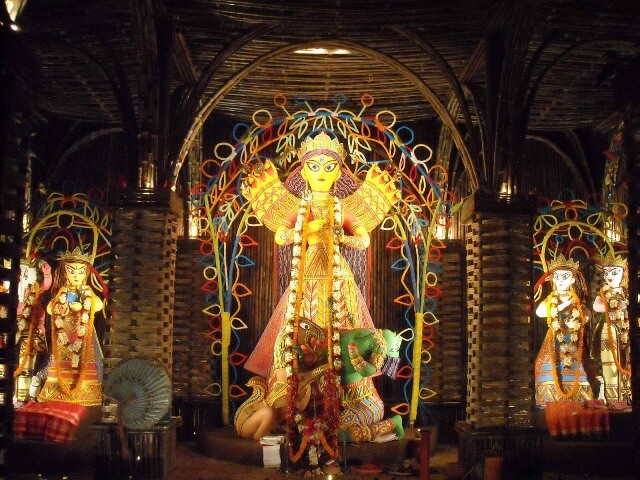 Theme : Raising a voice against use of Genetically Modified Organisms (GMO)

The theme this year is to raise a voice against use of Genetically Modified Organisms (GMO). Goddess Durga has been depicted in the form of Hybridashuromardini and she is leading the fight against the use of GMO. A Devil’s Workshop has literally been created in the interiors, which signifies the catastrophic efforts of hybridization and cross-breeding to mankind and the overall ecosystem. There is a distinct inspiration taken from Sukumar Ray’s iconic TyanshGoru. One can spot a banana with the face of a fish, a sheep with the body of a kangaroo and a hippo peeping out of a kangaroo’s pocket. In line with their theme, they have not used any plastic for the construction of their Pandal this year.