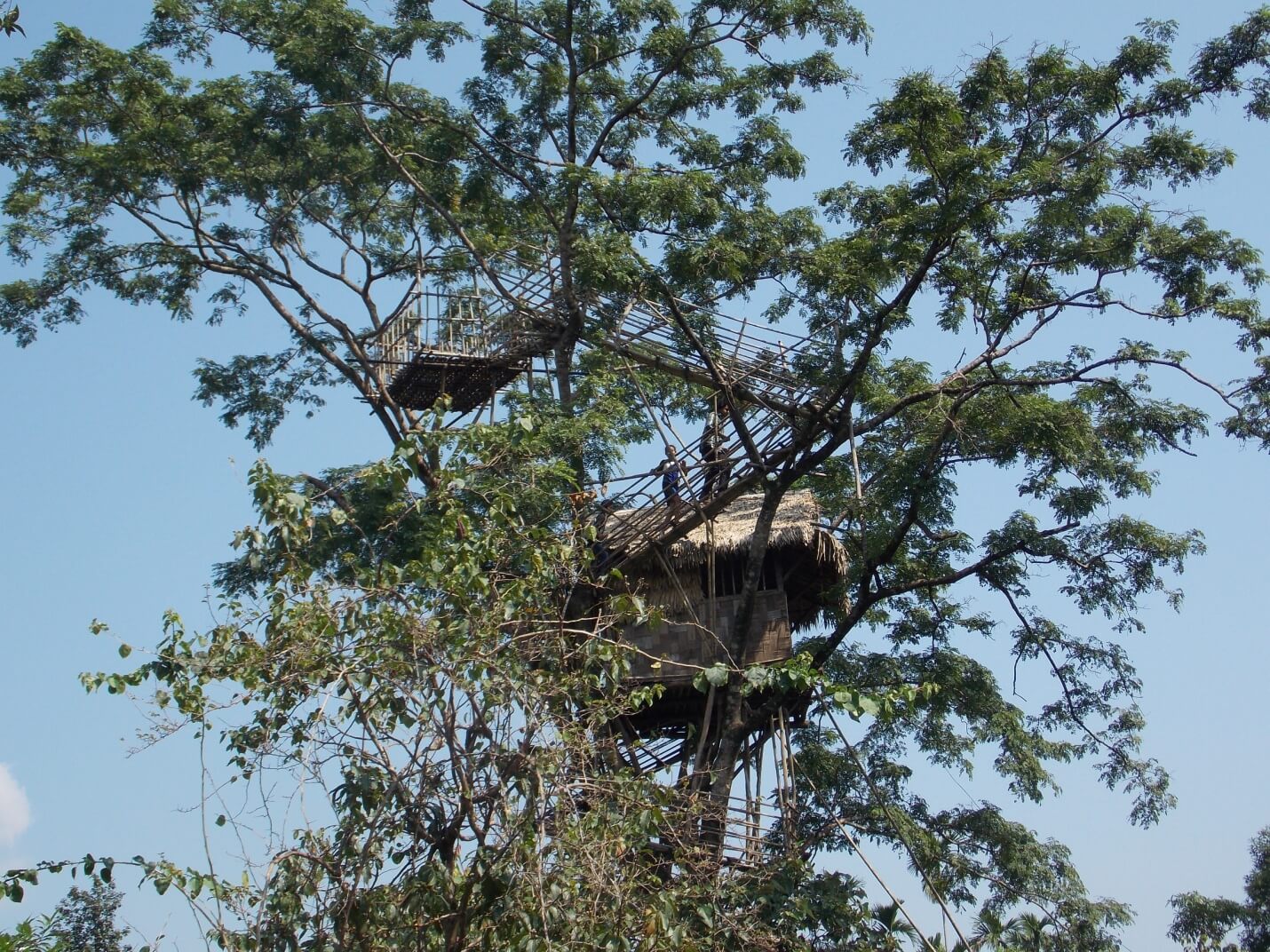 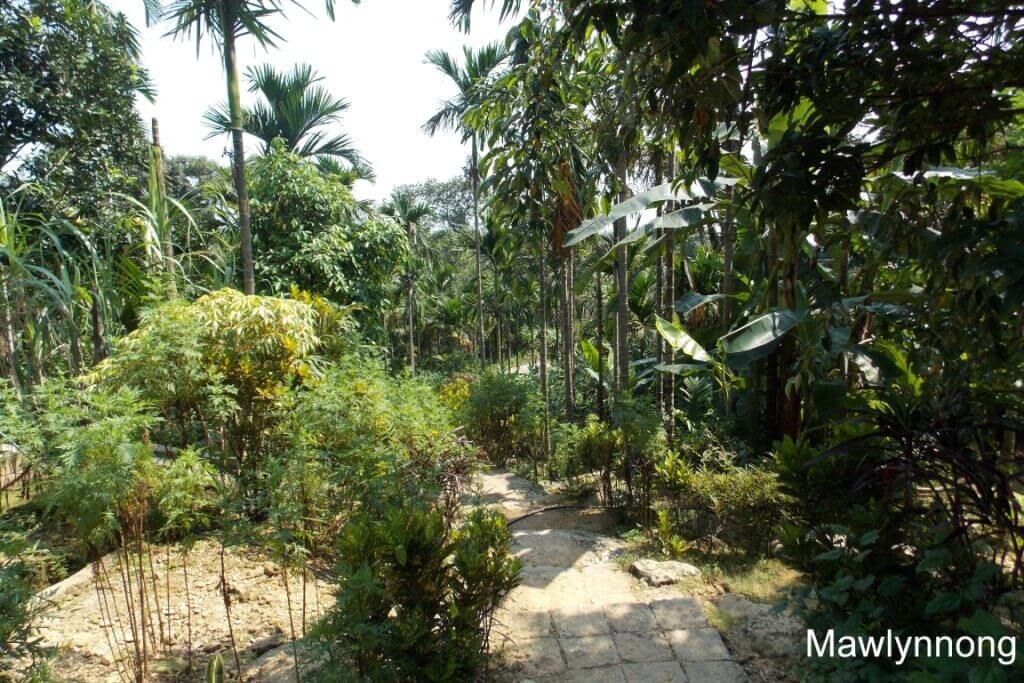 We know Japan as the cleanest country of Asia, but a cleanest village in Asia is far from our thought!

Well; our very own India, though lesser known for its cleanliness, proudly offers Mawlynnong in Meghalaya as the only cleanest village of Asia.

Having lived in the city from my birth, I always longed to practically experience the mysticism of a village. My yearning was rewarded when I went for a trip with my family during the Durga puja vacations in 2014. Let me unfold my story to you….

Reaching Shilong from Kolkata, we heard of a small village which won the status of the cleanest village (2003), not just in India but in the whole of Asia. I was so very excited and thrilled to see the village and without wasting any time, headed for Mawlynnong. 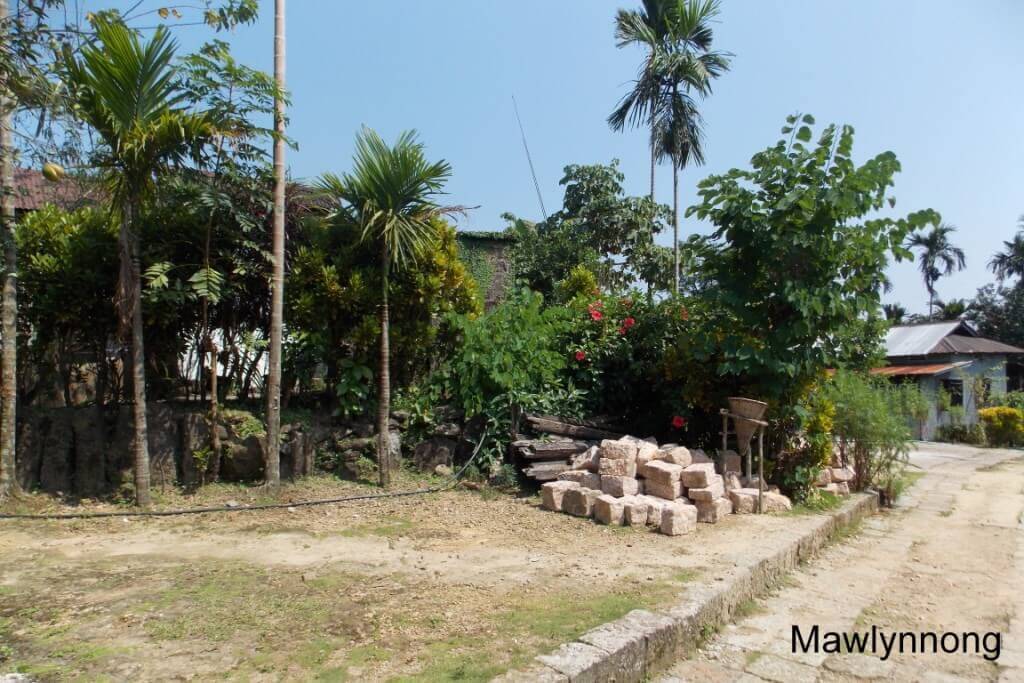 We travelled about 85 kms from Shilong by road and reached the destination. I was spellbound and could not believe my eyes- I came to see what a village looks like and landed up in paradise!

The picturesque village is not so small either and consists of 80-90 families, basically tribal.

The village is undoubtedly and unarguably clean & beautiful, so as the souls of the inhabitants and their simplicity.

The villagers will greet you with a warm smile. And nature- orchids, roses, lilies, orchards, local flowers and rare birds are ready to welcome you…..

There are some guest houses to stay and you can be one with the nature- far from the mundane & hustle bustle of daily life. 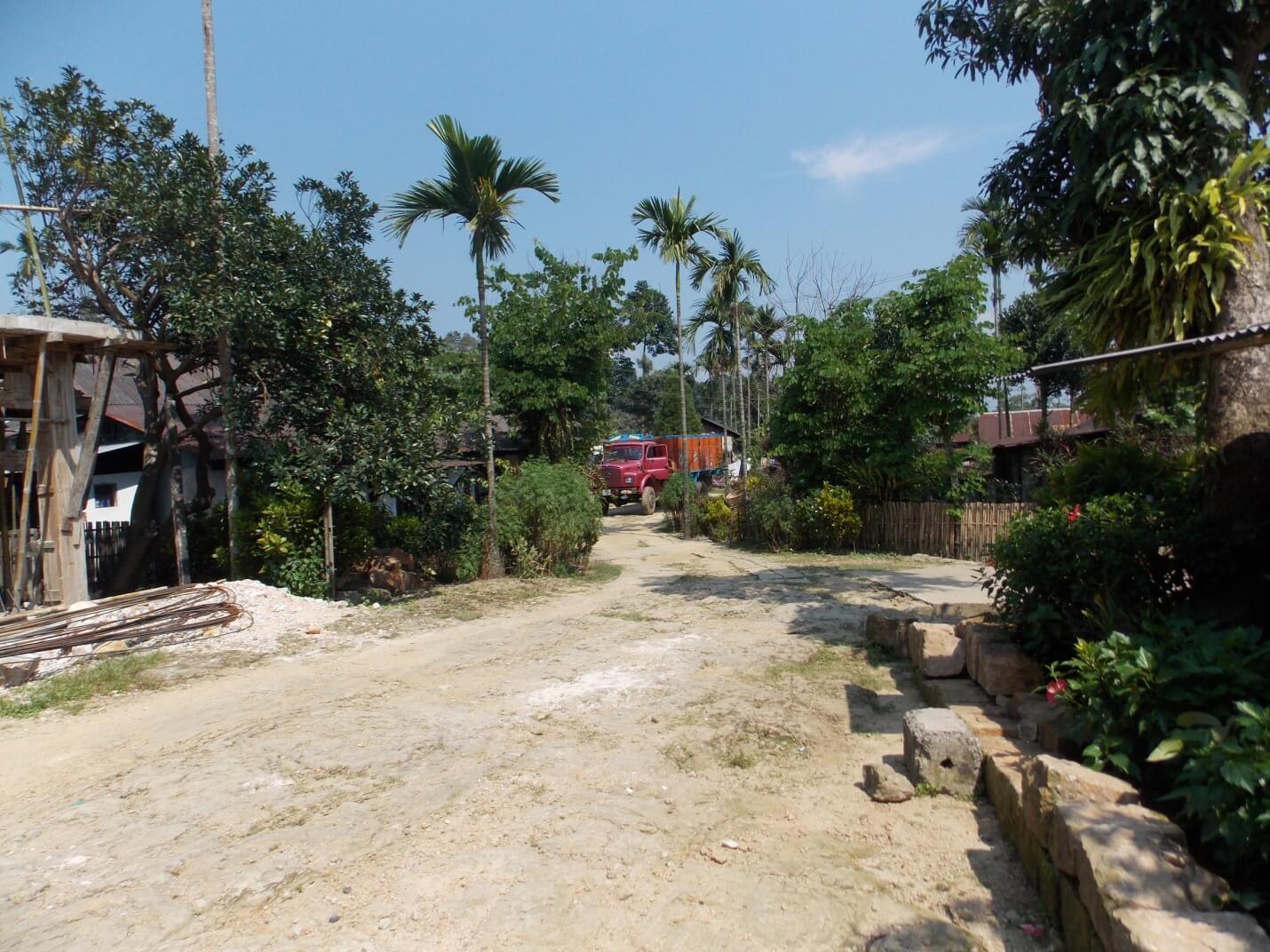 The Khasi people (or Khasis) are an indigenous tribe and majority of them stays at Meghalaya. A unique feature of them is that they follow the matrilineal system of descent and inheritance.

Their livelihood is primarily sustained by agriculture.

Tourism is a source of extra income and almost all of them run restaurants for tourists. Chili salad, is a special cuisine of this region- a must have for those who swear by fiery and spicy taste buds. 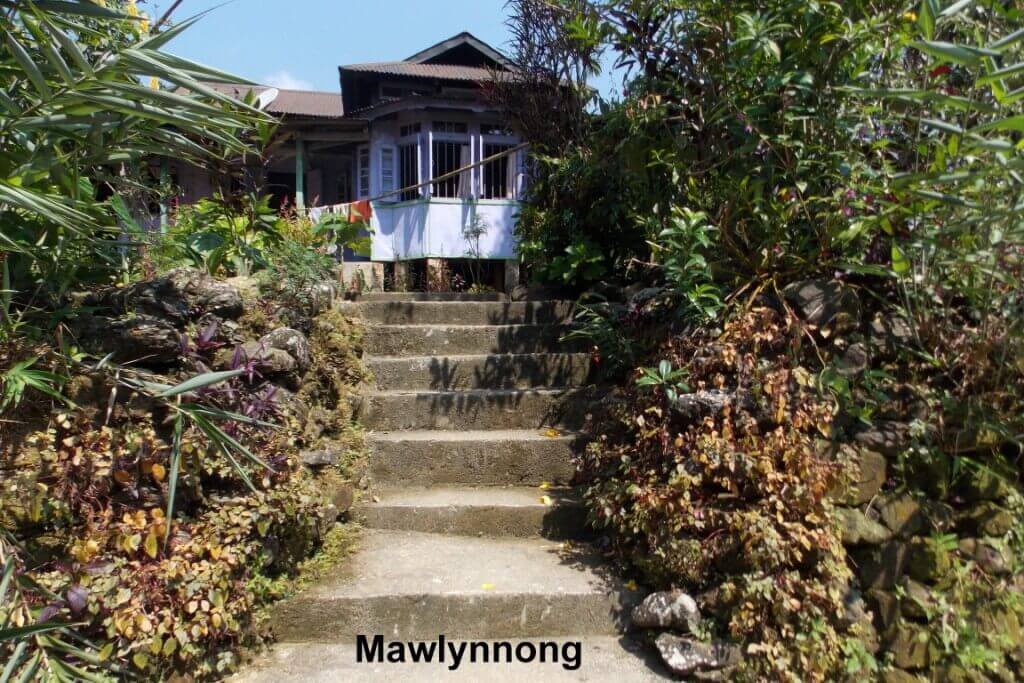 Kids are set to task of keeping the area clean. Some tourists litter the place, especially by throwing plastic bags, which is a saddest part. The kids pick those up and points out at several dustbins placed at every nook and corner.

There are two attractions of Mawlynnong village. The primary of them is the famed “Living Root Bridge” which is at a distance of 2 Kms.

These bridges are not built or constructed; they have grown naturally and take almost a decade or more to become strong and sturdy. We had to descend almost 200 steps to reach the foot of the bridge. However, tiredness gave way to wonder when we finally laid our eyes on it. The only word that came to my mind was “SPECTACULAR”!! 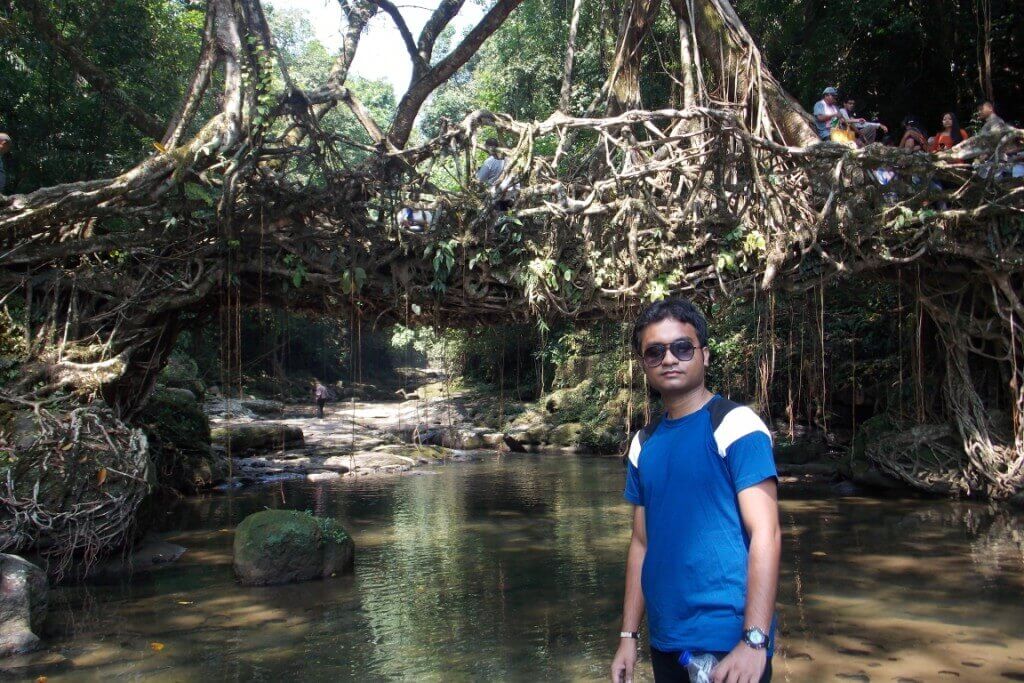 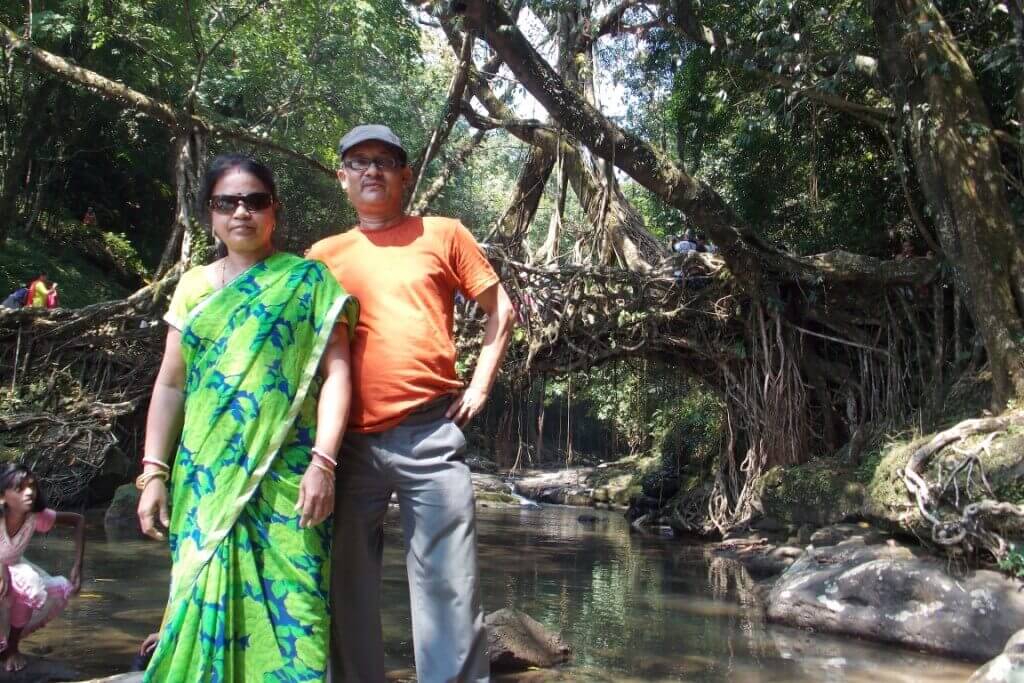 A stream runs underneath the bridge which originates from a nearby waterfall.

This was the first time in my life that I crossed a stream by walking through a natural bridge. The rippling sound of the stream, chirping of the birds complimented to the entire silhouette. I was amazed and I wondered how nature could be so beautiful!!!! I felt being one with the nature.

Another attraction is a tree house known as “Sky“ View. People climb on it for an aerial view of the entire landscape.

If you are lucky, then you can get the top view of Bangladesh; not so far from here.

Majority of the people of Meghalaya are Christians and there is a beautiful Church with a Missionary.

I conclude here and leave the rest to the readers to experience themselves, as I did.

Mawlynnong is around 90 km from Shilong and the best way to reach here is by hiring a cab. You need to take the AH1-AH2-