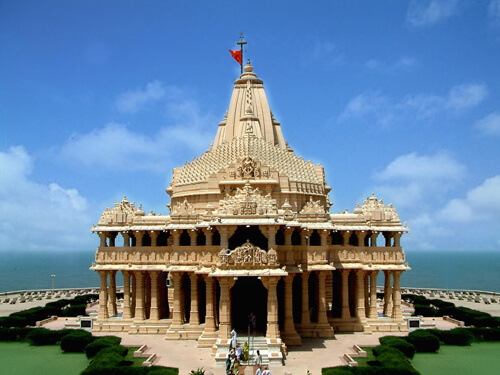 India is a diverse country. There are many cultures, many traditions, and many religions. This vast country has many houses for Gods and Goddesses. The temples is scattered all around the country and some of them can be reached easily and some are difficult to reach. Here are some examples of the famous Temples of  Gujrat:

Akshardham is tribute to the Sarafan DAa/ma in stone. The monument is set in a 23-acre plot at Gandhinagar is built in pink sandstone. It is 108 feet tall and required 6000 tons of stone to make it. Not a small part of steel has been used here.

The shrine contains a 1.2 ton gold-plated idol of Lord Swaminarayan, the creator of the sect that bears his name. The 7-foot idol sits with his right hand raised in abhay mudra. On both of his side he has Swami Gunatitanand on his right and Swami Gopalanand Swami on his left. Both of them were his disciples.

Ambaji Temple is located in Banaskantha district. It is the seat of Ambe Mata. People pay respect to her during Navratri through song and dance. She is a facet of goddess Parvati, Lord Shiv’s spouse. Amba or Ambe Mata is shown riding a tiger during the Navratri celebrations.

Dwarka (Jamnagar district) was the capital of Lord Krishna’s earthly kingdom. He moved his Kingdom to Kusasthali which was the old name of the region to escape the irritating attacks of Kamsa’s father-in-law Jarasandha on Mathura after Krishna killed Kamsa. Kusasthali was Krishna’s inherited place on his mother’s side. It was created by Raivata, his Yadava ancestor after he had lost his kingdom to Punyajanas and traveled to Mathura for safety.

The Someshwar Mahadev temple is one of the tallest temples of India. The building of the present temple in Junagadh district is activated in 1950. It is the seventh temple built to honor the glory of Lord Somnath.

As said by the legend, Soma, the moon God built this temple in gold, Ravan in silver, Krishna in wood and king Bhimdev of Anhilwad in stone. Soma made the temple as a gesture after Lord Shiva treated him of his illness. This illness was instigated by his father-in-law Daksha Prajapati’s curse. Daksha cursed him to diminish as he was lovesick with Rohini and was ignoring his other 26 wives, all of whom were the daughters of Prajapati. It is said that Brahma counseled him to build the temple in honor of Shiva.