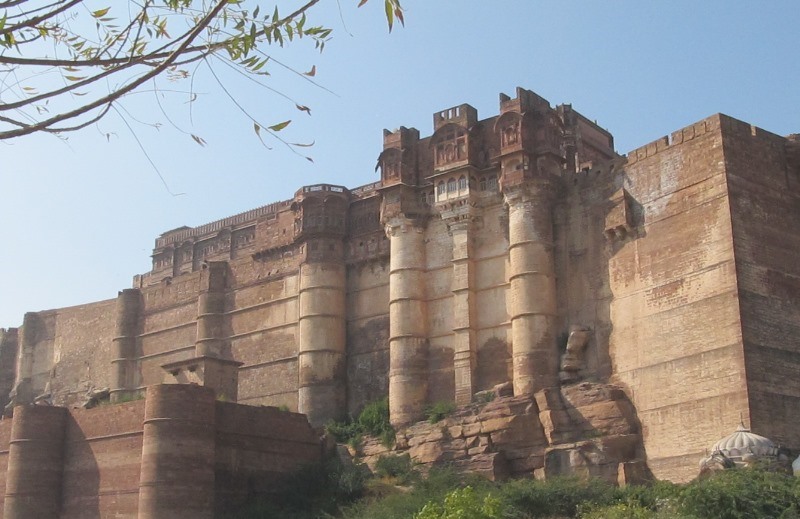 One dark night, an exhausted king with few of his clan was moving through the hills and forests of Aravalli. The king was shattered; he was running away from his enemy, the powerful Afghans, who drove them away from their homeland Kaunaj. In spite of his fatigue, the king was in search of some place where he could rebuild his kingdom.  At last, he reached Pali.  The king married the sister of the local prince and hence gained control over that place.

Days past and after few years the king banished the Pratiharas from Mandore and took control of that place. He built a fort there and lived with his clan.

Thousand years past, it was 1459. The present king of that clan was then Rao Jodha; one of 24 sons of Rao Ranmal. Thousand-year-old Mandore fort was then decaying and was unable to provide Jodha and his men the necessary security from the enemies outside. Rao Jodha decided to shift his kingdom to a better place.  With the help of his Diwan, Jodha laid the foundation of his fort on a rocky hill 9 Km to the south of Mandore.  The fort was named Meherangarh – Sun-Fort; as Jodha was a great devotee of Sun God, the locality was named after Rao Jodha as Jodhpur.

Back in 2014, a group of unknown travelers from Bengal was on their way to Mehrangarh fort. Their heart was bouncing fast. With the increase of height, their curiosity was mounting. All of them were impatient, eager to have their first look of Meherangarh. That group was ours. And after an hour-long travel we were in front of the first gate of the fort.

What an experienced king Rao Jodha was! He protected his fort from the enemies by seven strong and well-secured gates. One had to conquer all the seven gates in order to enter the fort. The second one still bears the bullet marks on it; shot by the forces of Jaipur and Bikaner. The other famous gates were Jai Pol, Fateh pol, Dedh Kamgra Pol.

Thrilled by the sight of those enormous structures and the adventure stories of Rathore Rajput clan we entered the fort.

The fort is the second largest and one of the most prestigious forts of Rajasthan. We felt the rich culture everywhere inside it.

The palaces with great sculptures and paintings were telling us the glory of the past.

For me, that was an experience no word is able to explain. I was bewitched by the fort. I could feel the presence of Rao Jodha everywhere. He was with me, telling me his passion, his glory- Jodhpur. I could sense the pride and vanity on his face when I was looking at the creations of his ancestors. The maximum part of this fort which stands till date was built by Jaswant Singh (1638-78).

To the left of this place there was a monument Jaswant Thada, built in the memory of Jaswant Singh by his son.

We visited the museum. There were lots of elephant Howdahs, Palanquins, armors, arms, and lots of royal belongings displayed for the visitors.

After finishing our museum tour, we went up to see the King’s parliament (Darbar).

On top of the outer wall of the fort, there was Kilkila cannon- stands still but magnificently describing the tales of the past battles.

Enchanted we started climbing down the fort. Reaching the bottom of the hill, I looked back at the top of the fort. I could see Rao Jodha standing there; his metallic armor shining brightly in the setting sun, his face was glowing with pride. What could I say about this tour? A date with Rao Jodha in his pride-land?