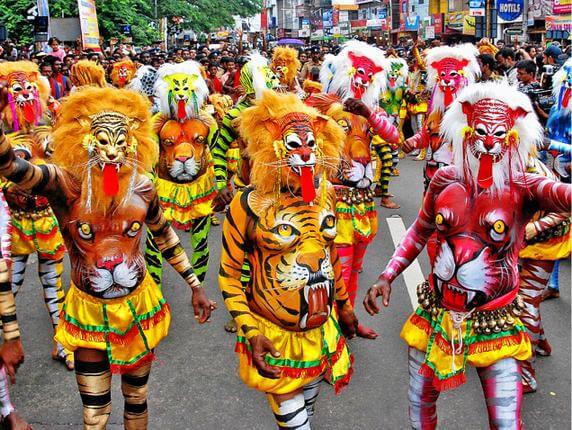 Can you guess when will all the people of our country come together other than an exciting India-Australia cricket match? It’s during festivals. And it is needless to say that India is a country which hosts numerous famous festivals-some of those are famous because of the grandeurs and some of those are famous because they are strange in nature. Here are details of some weirdest festivals of India.

Caste system is a major and oldest problem of India. Despite many laws and an increasing number of ways to build the social awareness many still hold on to it.  The Kukke Subramania Temple of Karnataka follows a bizarre centuries-old custom called Madey Snana or Spit Bath.  The ritual is like this, people from lower castes roll on the floor over food leftovers of Brahmins on banana leaves. The reason is the lower caste people think that this will rid them of various infirmities. The ritual was once banned in 2010, however, had to be started once again in 2011 after protests by the Malekudiya tribe. However, it is still one of the most controversial rituals of India.

In ancient time, 187 stones of coconut shape were restored form the Mahalakshmi Temple, Mettu Mahadhanapuram, in the Karur District of Tamil Nadu. During the British period, The British planned to build a railway track across the temple which the local villagers opposed. Then the rulers set a challenge; if the villagers could broke all the stones on their heads then the track could be changed. The villagers succeeded in the challenge and thus saved the temple.

In the present day, on the 18th day of the Tamil month of Aadi, every year, thousands of devotees come to this temple and allow the priest to smash coconuts on their heads believing this will bring them good luck and health.

The Govardhan festival is celebrated a day after Diwali, on the occasion of Enadakshi. In the Bhiwdawad village, Maharashtra, this festival has a special meaning. During this festival, the local villagers ornate their cows with flowers, colors and henna, and lay down on the ground to allow cows to walk over them. The ritual takes place after a five-day fast. They believe this will move Gods towards their will.

This is commonly known as the Fire Festival. Angi Kheli is celebrated in every April in Mangalore with hundreds of devotees wearing nothing but loincloths and they throw fireballs at each other. The devotees are divided into two teams and if a player is hit by the fireball, he is treated with some kind of a holy water called Kumkumarchane. A weird festival which is a must see if you are an India.

Puli Kali is celebrated on the fourth day of Onam. It is celebrated mainly in Thrissur district of Kerala. It is a festival of dance, colors and energy. The ritual is performed by trained artists who painted themselves in bright yellow, red and black like tigers and dance on the streets to traditional folk beats. Thousands of people gathered to view this spectacular sight every year.

2 thoughts on “Some Weirdest Festivals of India”