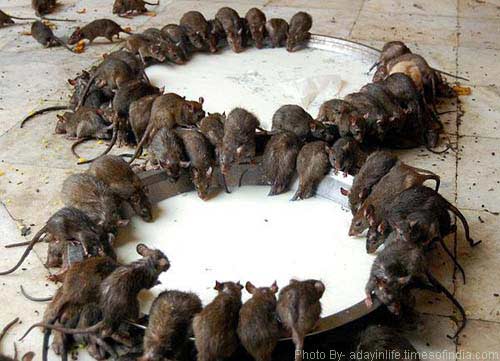 “There are more things in heaven and earth, Horatio,
Than are dreamt of in your philosophy.” – Hamlet, Shakespeare

Have you ever think how true this quote is? Apart from the seven wonders, the world is a place full of wired places and objects which draw our attention from the very beginning. Starting from the Leap Castle of Ireland where you can feel unnatural presence to the Jatinga valley of Assam in India where every year lots of foreign birds came and all died due to unknown reason. In this article, we are sharing the story of two such strange temples; one is Tiger Temple of Thailand and the other is Karni Mata Temple of India.

Wat Pha Luang Ta Bua- this is the local name of this strange temple situated in western Thailand, Saiyok district of Thailand’s Kanchanaburi province. It is a Theravada Buddhist temple established in the year 1994 as a sanctuary for wild animals, especially tigers.

The first tiger cub came here in the year 1999, given to the monk by the villagers who found it. But the cub died soon after coming here.  Later several tiger cubs were rescued by the monks of this temple and now the number of tigers here increased to 167.

Most of the tigers here are Indochinese tigers except Mek, who is a Bengal tiger. There are also some newly discovered Malayan tigers.

Last year an organization called Care for the Wild International claimed that the Tiger temple is involved in ill-treatment with the tigers and clandestine exchange of it in between the year 2005 to 2008. Moreover, the site doesn’t have any license required for keeping wild animals as per the Thai Wild Animals Reservation and Protection Act of 1992.

On 2nd February 2015, an official investigation of the temple was done by the forest official and after 10 days of investigation, ABC News reported that the allegation of ill-treatment with the animal was cleared; however, the officials found 38 protected birds on the temple grounds; the temple has no proper license to raise them.

Karni Mata Temple is located in Deshnoke, 30 Km away from Bikaner, Rajasthan, India. This Hindu temple is dedicated to Karni Mata and is locally famous as the Temple of Rats.

Legend says that Laxman, stepson of Karni Mata once drowned in a pond in Kapil Sarovar in Kolayat Tehsil while he attempted to drink from it. Karni Mata pleaded the God of Death Yama for his life and after refusing for the first time, Yama reincarnated Laxman and all the male children of Karni Mata as rats.

According to another legend, a strong army of 20,000 soldiers deserted a nearby battle and came running to Deshnoke.  When Karni Mata heard about their sins which is punishable by death; she spares their lives but turned them all into rats and offered her temple as their future residence. The soldiers also expressed their gratitude by promising to serve Karni Mata evermore.

The temple building was completed in the early 20th century by Maharaja Ganga Singh of Bikaner. The temple was built in late Mughal style. In the front of the temple, there is a beautiful marble façade that has silver doors. On the panels of the silver doors, the legend of Karni Mata is depicted. The temple was further improved by Kundanlal Verma of Hyderabad in the year 1999.

There are a few white rats among thousands of black rats of the temple which are considered to be especially holy. It is believed that they are the signs of Karni Mata herself and her four sons. Viewing them is a special blessing and visitors put in extra efforts to bring them forward by offering Prasad.

The temple opens to the public at 4.00 a.m. early in the morning. Charan priests perform Mangla-Ki-Aarti and offer special food, known as bhog in India, in worship. Devotees offer food to the rats of the temple which roam around in large numbers and are considered as fortunate.