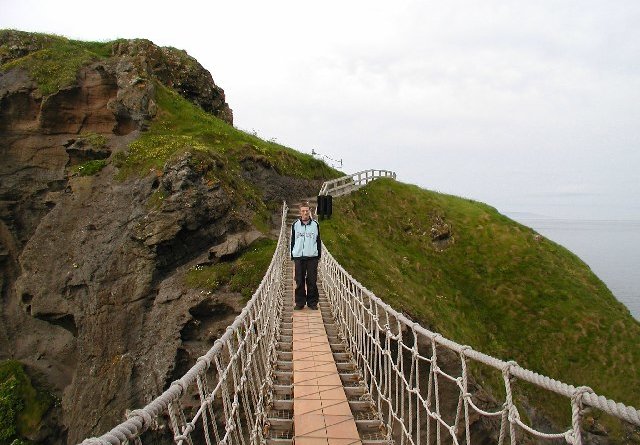 It is the longest and tallest glass bottom bridge in the world. The bride was opened to the public on August 20, 2016. However, the authority had to close the bridge temporarily just 13 days after its opening due to excessive traffic. At that time the bridge was able to handle 8000 people per day, but was experiencing over 80,000 people per day. After modification the bridge was reopened on September 30, 2016.

The bride is 430 meter long and 6 meter wide. It is really scary to clearly see the ground 260 meters below your foot through the crystal clear glass bottom of the bridge.

It is the most famous tourist attraction in Northern Ireland. Carrick-a-Rede is a rope bridge joins Irish mainland to the small island carrickarede. The bridge is 66 feet long and 98 feet high above the ground. Crossing a hanging bridge that is 98 feet high above the rocks below on foot is enough to give you a fright.

It is considered as the most dangerous bridges of the world. In 2011 monsoon, the hanging rope bridge was badly damaged. Though it is open till date but the condition of the footbridge is very poor. Crossing a footbridge in a windy area is scary enough. Moreover this one has one handrail and few, far between planks; enough to give you Goosebumps.

The tallest bridge in the world, 1,125 feet above the base, joins Paris to Béziers and Montpellier. This is known as the greatest engineering feats of all time. Why not? The highest point of the Millau Viaduct bridge is 62 feet higher than Eiffel Tower. While crossing this point of the bridge it seems as if we are floating in the clouds. Indeed scary and exciting also.

Lake Ponchartrain Causeway Bridge is 24 mile-long that joins New Orleans to Mandeville, in Louisiana, over the Lake Ponchartrain. It is the longest overwater bridge in the world. While crossing the middle 8 miles of the bridge, all signs of land are vanished from the viewpoint. It seems you are driving under the sky and over water on an unending road. This produces panic attacks to many drivers on the bridge and that is why this is one of the scariest bridges in US.

Volgograd Bridge is located over river Volga in the city of Volgograd. It is 7.1km long. During storm, the bridge shakes and oscillates rigorously. Beware, cars can be thrown into the opposite lane during violent storm and this makes it one of the scariest bridges in Russia.

The Pai Memorial Bridge is one of the main tourist attractions in Pai. It is located Mae Hong Son Province in northern Thailand near the Myanmar border. The bridge was made of iron. It was originally built during WWII for Japanese soldiers to cross the Pai River.

With just one or two bamboo planks under foot and two more for handrails, crossing the monkey bridge in Vietnam can be really tricky.

It is located in remote mountain valleys of Japan and was constructed with just vine and wooden slats 900 years ago. Recently, the bridge is strengthened by wire reinforcements and side rails, which make the vision of Iya-gawa River 46 foot below slightly less traumatic.

It is the oldest and longest footbridge in the world made with teak. U Bein is constructed from the remains of a royal palace. The bridge is most spectacular at sunset. Just after sunrise, hundreds of villagers and monks cross it by foot everyday.