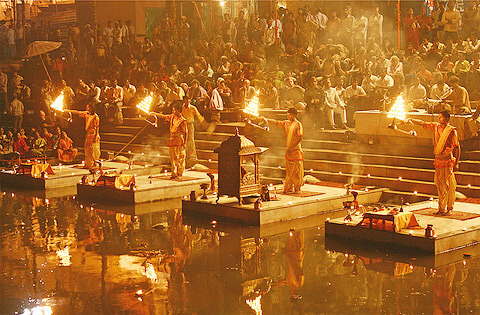 Varanasi is one of the most famous religious cities in India.

The River Ganga is the spiritual emblem of India.

The Ganga is considered to be most sacred in the Hindu religion.

The most popular mythological belief is that the River Ganga originates as pure energy from the tufts of hair of the Shaivaite God Shiva. In this form, she is recognised as Shakti or a mass of moving energy.

Hindus prefer to consecrate the ashes of their dead in the Ganga with the belief that this act results in salvation for the departed soul.

One of the major cities lying on the banks of the River Ganga is Varanasi,

According to records the temple was found in 1490.

Mughal Emperor Akbar gave permission to build the original temple, which was later destroyed by Aurangazeb.

The Kashi Vishwanath temple was last rebuilt and restored to its glory by the Queen of Indore, Rani Ahilya Bai Holkar.

Kashi Vishwanath is revered as one of the 12 Jyotirlingas of Shiva. It is also said that Lord Shiva actually stayed here for some time.

It is the most spectacular ghat in Varanasi.

According to one myth Lord Brahma created it to welcome Lord Shiva.

A group of priests daily perform “Agni Pooja” (Worship to Fire) in the evening at this ghat and dedicate it to Lord Shiva, River Ganges, Surya (Sun), Agni (Fire), and the whole universe.

According to one, it is believed to be the place where Lord Vishnu dug a pit with his Chakra and filled it with his perspiration while performing various penances.

Hindu cremations customarily take place here, though a majority of dead bodies are taken for cremation to the Manikarnik Ghat.

According to other sources that Manikarnik Ghat is named after Jhansi ki Rani Laxmibhai.

The Ramnagar Fort was built by the king of Kashi Raja Balwant Singh in 1750.

Assi ghat lies at the confluence of the Ganges with the dry river Asi marks the traditional southern boundary of the city.

Sarnath Museum is the oldest site museum of Archaeological Survey of India.

The museum has 6,832 sculptures and artefacts.

All of these are the findings and excavations at the archaeological site of Sarnath, by the Archaeological Survey of India.

Chaukhandi Stupa is an important Buddhist stupa in Sarnath

The Chaukhandi Stupa is built to mark the site where Lord Buddha and his first disciples met travelling from Bodh Gaya to Sarnath.

SARNATH is mainly known for BUDDHA.

SARNATH originated from Saraganath means “Lord of the deer”.

Most of buildings and structure were destroyed and damaged by the Truks.

The ASHOKA PILLAR at SARNATH survived the Turkish invasion but was broken during excavation.

It is the only temple dedicated to Mother India.

The Temple was built by Babu Shiv Prasad Gupt and innaugurated by Mahatma Gandhi in 1936.

Instead of the customary gods and goddesses, it houses a relief map of undivided India, carved out of marble complete with plains, mountains and oceans.